When you begin to create a music concert program, you need to start by deciding on your music and running order. If you are working with children, it’s a good idea to have the youngest children play first as they can get very restless if they have to sit and wait for their turn to play. If you have a mixture of different ensembles, alternate between a big ensemble and a small one, or a solo performance. But do keep in mind the time it takes to get people on and off the stage. It’s quite acceptable for an ensemble to sit on the stage during a solo performance.

If you are a solo performer planning a piano recital, you will be able to produce quite a detailed concert program, as we will see. If, on the other hand, you’re a piano teacher with many students or a school teacher with ensembles, your music concert program will be more confined to a list of performers and what they’re going to play.

Create an interesting mix of songs to keep your audience interested and engaged. For instance, putting three slow tunes one after the other might put the audience to sleep, or even worse, put all your students to sleep! So keep in mind the energy and forward momentum of your concert. If you have an intermission, end the first half of your concert with a big ensemble song that leaves the audience talking positively about the concert while they have their refreshments, and are eager to hear the second half of the concert. Be sure to end the concert with the biggest ensemble, performing an uplifting and rousing piece so your audience leaves feeling great. To create a running order, write each song on a piece of paper and pin them to a cork board. From there, you can move them around until you feel you’ve got the right flow for your concert. If you have an intermission, divide your songs approximately in half, pick the best songs for the end of the first half and then continue with the order of the rest of the songs for the second half.

Once you have chosen your pieces and have them in running order, you can then think about committing it to paper and making the music concert program.

If you’re a school music teacher who has various ensembles - maybe a jazz band, a string orchestra, a choir, and some soloists - the main bulk of your music concert program is going to be the names of your students, the titles of the pieces of music they’ll be playing, and the composers and/or arrangers.

Here, you will have to decide how to best layout your concert program on the page.  It’s often the case that several students play in more than one ensemble, and some may be in a few ensembles and perform a solo as well. This can make it difficult to fit everything in tidily so it doesn’t become a mess and difficult to read. An alternative is to list each child’s name and which ensemble(s) or solo they will take part in, but you still need a running order so it can take up more space.

Either way, you do it, triple check that you have each and every child included in the music program, and that their names are spelled correctly. Parents, aunts, uncles, and grandparents often keep these programs for a long time so if the child’s name is spelled incorrectly they can get very upset.

For smaller concerts, one page folded in half and printed in the landscape format will likely be the best way to lay out your music concert program. The front should have the name of the concert and school, the date, and venue of the concert with an eye-catching graphic. Open the page so the two middle halves are visible and that should be enough space to list your performers and what they’re playing. On the back, you can put information about your school, teachers, dates when the school is in session, and future performance dates. Also, use this space to thank any colleagues who helped put the concert together, any person or company who donated toward the concert or, if you’re raising funds for charity, information about your chosen charity.

For solo concert performers, you have a lot more room to put information about the music you’ll be playing. You should include a concise biography about yourself along with a headshot and mention any future performances you have scheduled. Once you have decided on what music you’ll be playing in your concert, and in what order, list the pieces in your music concert program along with the name of the composer for each piece. If you have space, include the dates of the composers and perhaps a line or two about when the piece was written, and any interesting comments about it. If space allows, you can go further and write more personally about why you have chosen these pieces. Perhaps you’ve been working with another musician who has challenged you to perform some contemporary pieces, or maybe you’ve taken a trip to France and the country inspired you to play the music of Debussy, Faure, and Lili Boulanger. It’s always better to tie the concert together with a distinct theme. 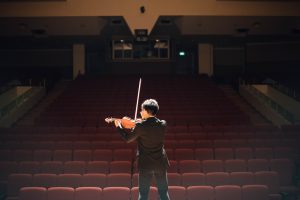 Whatever type of concert you’re putting on, don’t forget to include any websites, email addresses, and other social media info in your concert program, especially if you want people to follow your social media or sign up to your newsletter. If you’re a private teacher, make sure you include your phone number, and if you have a website, your website address or QR code should be right there on your concert program.

Your music concert program is a keepsake and will make its way into many scrapbooks and memory boxes. It’s worth making it as detailed and as beautiful as possible!