Do you judge yourself as you practice? Those negative inner thoughts are human nature. Sometimes voices from the past echo in our heads. Sometimes, the thoughts have nothing to do with the task at hand at all. Every good book that I have ever found, on practicing anything—from tennis, to a musical instrument, to public speaking—advises working positively without judging.

Evaluate. That's the ticket. You don't have to beat yourself up. Judging while learning and practicing is negative. The outcome of judging is also negative. Evaluating is positive. When you evaluate, you look at where you were, where you are, and what will help you get better. Here’s an example.

It’s the Don’t Think About Elephants exercise. Of course, the first thing that pops into your mind when someone says don’t think about elephants is a very large elephant complete with floppy ears, possibly eating peanuts. The same thing applies to music practice. If you say don’t do something, that very thing pops right into the mind.

In the first judging example above, the brain has not been given anything to shoot for— just a general don’t mess up. Then, more poor instructions (don’t play Cs & don’t miss the last note) mean the only things remembered are C and last note. In the second evaluating example, the brain has been given exact instructions on what to do (put 3 on C# and then aim for A) with a positive result.

Let’s talk a minute about that other judging voice, the one that says I'm so bad at this, I never get this part right, or I'll never be good enough. The path to silencing those kinds of thoughts is creative practice. Take things apart, change them, put them back together. And, give yourself specific directions along the way.

The result is the sheet you see below. I printed it two per page on 8.5" by 11" colored cardstock so that it looked as little like a practice journal as possible. I also left the back blank to provide extra writing room. 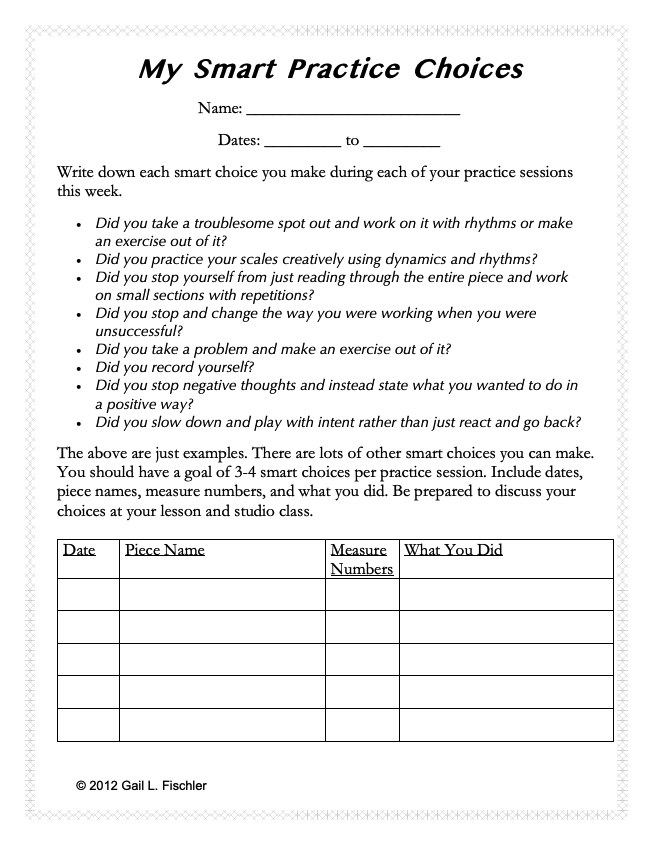 It was hard going at first. One student gave me a mileage log, I practiced 45 minutes on Tuesday. Presumably, they felt that just getting to the piano was a smart choice. And, although it was, it wasn't really the kind of choice I had in mind. Another told me they had practiced the 3rd page and then gave me a laundry list of things they needed to fix. Going over the Smart Choice card was the first thing we discussed at every lesson.

Little by little, students started to dig deeper and think about practicing differently. For several, it was like pulling teeth. But, once they had a repertoire of smart choices, they began to be more creative and come up with new strategies on their own. I was very happy when I began to read entries such as these three:

I practiced for about 15 minutes and couldn't focus at all, so I stopped and had a snack and a nap and then everything worked so much better.

I took tiny sections and worked until I was comfortable and then stuck them together.

I took those broken chords and practiced my arpeggios in lots of keys with that pattern, and I told myself to aim for the first note in every group.

Please feel free to use the Smart Choices card with your students or in your own practice. If you do use it, please include my copyright. I’d love to hear how it worked for you! Let me know over at Piano Addict.

(This article first appeared on August 20, 2013, on Piano Addict. Reprinted with permission.)

Any cookies that may not be particularly necessary for the website to function and is used specifically to collect user personal data via analytics, ads, other embedded contents are termed as non-necessary cookies. It is mandatory to procure user consent prior to running these cookies on your website.