Why is it a good idea to learn piano finger numbers and piano finger placement? It stands to reason that since there are eight notes in an octave and we only have five fingers, it would be beneficial to use all five fingers instead of one to play the keys more effectively. In this sense studying, piano finger placement unlocks the opportunity for us to perform a piece with the minimum amount of physical effort so that we can set our minds on loftier goals such as musical expression, phrasing, and interpretation. However, having a solid foundation as the nuts and bolts level is also intertwined with such goals. For example, paying close attention to which fingers to use on specific keys when starting to learn a piece will ensure that problems are avoided later on concerning phrasing, rhythm, tone, and accidental notes. 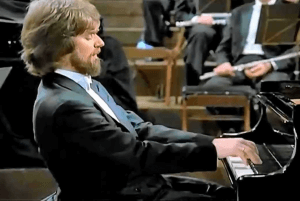 Working out finger placement also opens up a powerful strategy in music known as the economy of motion, which allows your hands to stay in the same place for as long as possible, thereby enabling you to perform with greater control, speed, and fluidity. Furthermore, focusing on piano finger placement accelerates the memorization of a piece and acts as a preventative measure against muscle strain and chronic conditions. In addition, when it comes to harder pieces in which you need to play fifth intervals, intricate passages, or anything by Bach, determining piano finger placement becomes imperative. What then are the general guidelines you should follow?

It is essential to have good posture for piano finger placement and though it may seem like a stuffy idea, there is a reason behind it in that it works to prevent muscle strain in your hands and allows you to play with greater ease. One should have both hands relaxed and resting over the keyboard with the fingers slightly extended and lightly touching the keys.  The wrists should not be below the hands.

Piano finger numbers are found in piano sheet music and indicate which finger to use on a specific note. The number one represents the thumb, two equals the index finger, three is assigned to the middle finger, four indicates the ring finger and five designates the pinky finger. 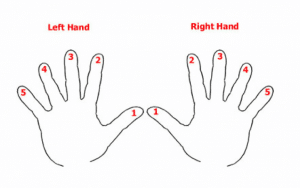 To start with, you can play the first five notes of the C major scale (C, D, E, F, G) with your right hand and use all five fingers to play each note, which will strengthen the weaker fourth and fifth fingers. This will also help you avoid developing bad habits such as exclusively using the stronger fingers. While playing these notes, it is important to curve your fingers as this ensures greater agility and reduces the risk of accidental notes. Once you master this you can progress to playing the full C major scale (C, D, E, F, G, A, B, C) which is played as follows: 1 (thumb), 2 (index), 3 (middle) 1 (thumb) 2 (index), 3 (middle), 4 (ring), and 5 (pinky finger).

As you might notice, the thumb goes under the index and middle fingers, which are in turn lifted over the thumb and this allows you to reach all eight notes in one continuous phrase. You can repeat the same pattern in reverse on the way down to reach the first note in the scale (5-4-3-2-1-3-2-1). Once you’re comfortable playing that with the right hand, you can mirror the same pattern with your left hand. Using all your fingers to play a scale or piece may seem like more work at the start but it actually means less effort in the long run, as you won’t have to change the position of your hand or make long leaps across the keys. This, in essence, is what piano finger numbers are about and they set the foundation to consider other aspects of piano finger placement and technique.

When deciding which fingers to use as you study a piece, you might consider the direction of the notes. In the C major scale example, they lead up to the octave of the root note of C so we used the 1,2,3, 1,2,3,4,5 finger pattern to reach that eight note without any stops or gaps. When learning new pieces, you should think about the course that the notes take and study where the phrases are continuous and where they stop in the sheet music. 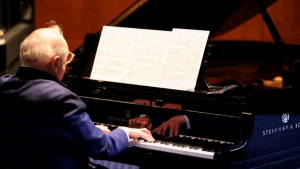 Another good rule of thumb is not to use your thumb on the black keys given that they are more easily reached by your longer index, middle, and ring fingers. Your thumb, being the shortest finger on your hand, should be used for the more easily accessible white keys. However, since this is only a guideline, there are times when you may need to use your thumb on black keys if, for example, the piece mostly contains sharp notes.

One way to learn pieces faster is to practice scales and arpeggios since scalar and arpeggio patterns are the building blocks of so much music. If you learn the piano finger placement for piano scales and arpeggios, you will be able to anticipate the optimum fingering for a piece. Scalar passages in compositions can be played with the same piano finger numbers that you would play for scales on their own, unless otherwise stated in the sheet music. Similarly, learning the best piano finger placement for a piece and practicing it until it becomes second nature means that the piece becomes part of the muscle memory of your fingers, which then frees up space in your mind to consider dynamics, atmosphere, and interpretation when performing. 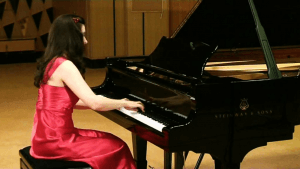 As earlier mentioned, piano finger placement is implicated in the higher aspects of a piece concerning expression. For example, different finger patterns for a passage can subtly or radically alter its tone. Although it is generally beneficial to use fingering that increases ease and efficiency, sometimes alternative and less efficient patterns can be more expressive. Additionally, piano finger numbers are often written with the emphasis of certain notes in mind. For example, trills, which involve the rapid alternation between two notes, often use a 3-2-3-2 pattern rather than a 5-4-5-4 one, since the fourth and fifth fingers are significantly weaker for clearly articulating the notes and more difficult to control.

Piano finger numbers are to make your piano learning journey easier in the long run, even if they’re difficult to learn in the beginning, it will be worth it in the end. So hold on and just bear through this period. You’ll soon be on your way to playing more complex pieces!

Any cookies that may not be particularly necessary for the website to function and is used specifically to collect user personal data via analytics, ads, other embedded contents are termed as non-necessary cookies. It is mandatory to procure user consent prior to running these cookies on your website.